How does Aperture Work?

Aperture, shutter speed, and ISO are unquestionably the holy trinity of photography. The three work together to generate your photos, and all three regulate how much light enters the camera through the lens. Today we’ll talk about aperture – how to understand it and how to utilise it to improve your photos.

Simply said, the aperture is the most visible of the three fundamental pillars. It may generate beautifully blurred backgrounds with only the primary subject of your photograph in focus, or it can bring everything into focus in the same shot, from the nearest tree to the furthest hill.

Aperture is the size of the hole within your lens that allows light to enter your camera. The larger the aperture, the more light enters the camera, and vice versa.

The Perplexing Relationship between F-Stops and Aperture

Does the definition of aperture sound simple? It is, however it can get perplexing when you apply f-stops to different aperture sizes. An f-stop, also known as an f-number, is a technique of expressing the size of the aperture, and a smaller f-stop number implies a wider aperture, and therefore more light entering the camera. A higher f-stop indicates a narrower aperture, which implies less light enters the camera.

Most people are familiar to bigger numbers signifying more of the same thing, but this is not the case with aperture and f-stops. When you consider that f/1.8 is greater than f/4 and considerably larger than f/8, it’s easy to understand how this may lead to confusion.

The chart below depicts the aperture size of the lens and the related f-stops:

Depth of Field: What Is It and How Can You Use It to Make an Impact?

Depth of field is achieved by adjusting the aperture to regulate how much of the image is in focus. The size of the aperture determines how much or how little of your image is crisp.

For example, a big f-stop, such as f/22 (which allows in less light than a smaller f-stop), will produce a picture with all of the foreground and background in focus. The majority of landscape photographs are taken with a higher f-stop.

A lower f-stop, such as f/1.8, on the other hand, will isolate your subject from the backdrop while blurring everything else. Consider close-up pictures in which just the eyes are tack-sharp and everything else fades into softness. George Hurrell and Clarence Sinclair Bull’s old-style Hollywood film star pictures are a good illustration of this. Shallow depth of field is also commonly employed in food photography to distinguish food items from the backdrop.

The image below shows how a landscape was photographed with a shallow depth of focus (high f-stop – tiny aperture). 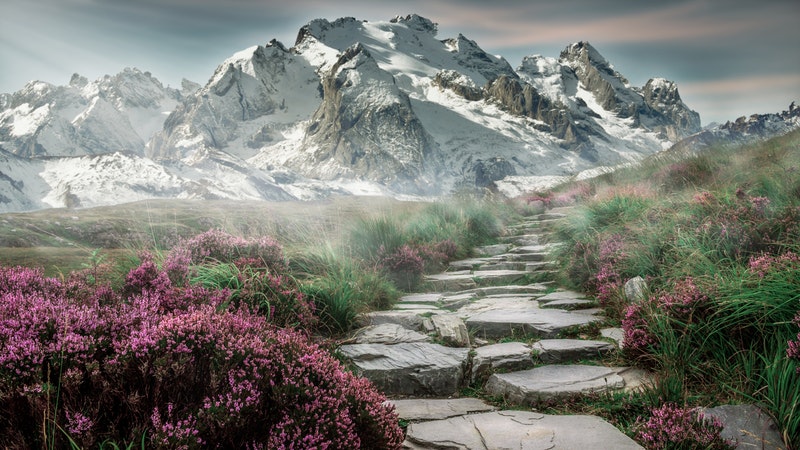 Everything is visible, from the vegetation in the foreground to the mountains in the background.

Shallow depth of field (small f-stop – big aperture) is perfectly demonstrated in this photograph of fruit hanging from a tree. 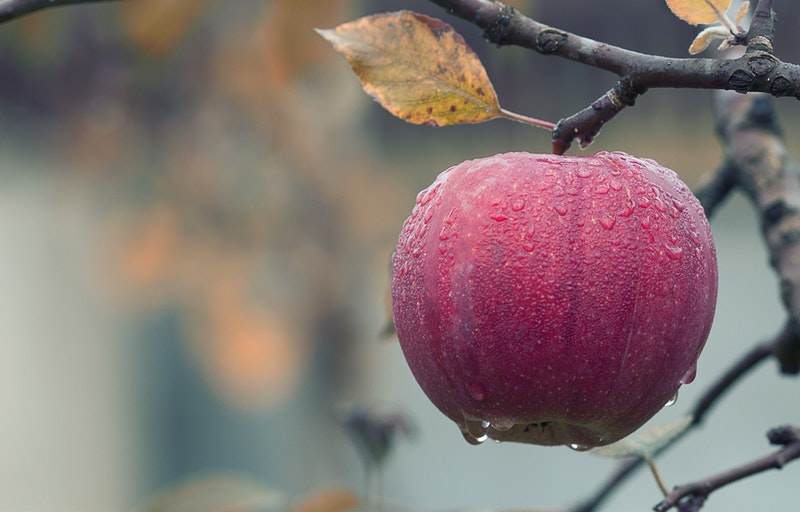 The apple and portion of the twig it is hanging from are in sharp focus, however the focus begins to fade with the leaf and twig behind the fruit, becoming completely blurred in the distance. Depth of field is utilised in this manner to effectively isolate a subject.

Depth of Field in Creative Ways

Shallow depth of field isn’t just for focusing on the topic directly in front of you; it’s also used imaginatively to differentiate one specific object in the midst of a line from similar or identical items, as shown in the image below: 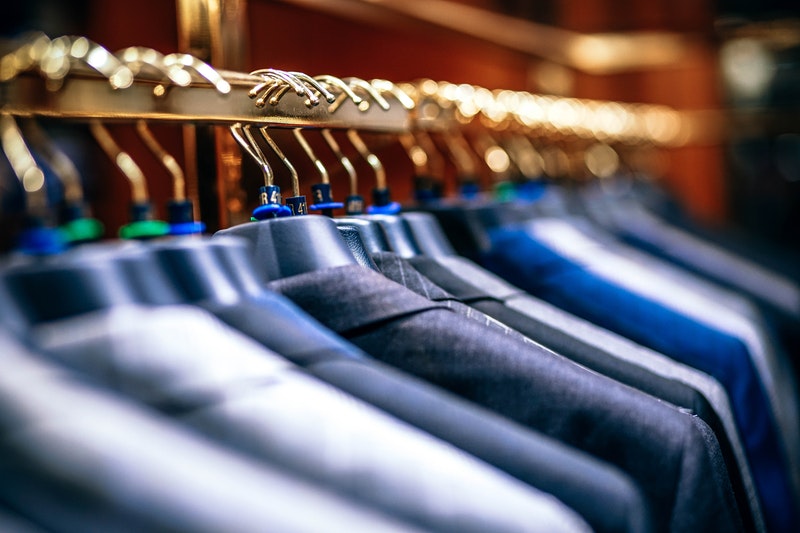 Notice how the jackets in the foreground are out of focus, flowing softly into the crisp coats, then dropping off again towards the rear of the image? This is a really efficient technique to use depth of field.

Don’t be fooled into believing that landscapes can only be photographed with a shallow depth of focus and everything crisp from front to back. Shallow depth of field may be used creatively to create extremely stunning landscape photos, as shown in the image below. Only the mid-foreground of the image is in focus, but you can still understand what the image is about, and I believe the sharpness gradually fading in and then out to softness in the distant is lovely. 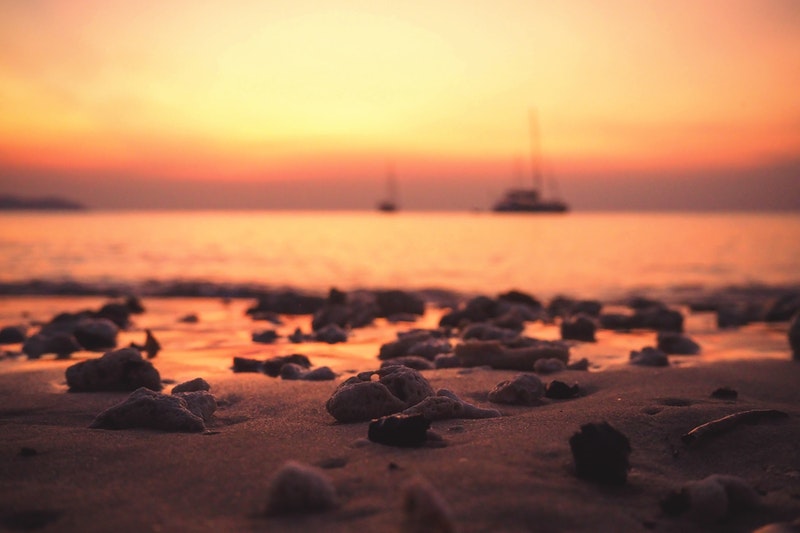 What the Difference Between Fast and Slow Lenses Means

You may have heard the terms ‘quick’ or’slow’ lenses before. Lenses have a restriction on how large or tiny the aperture may be, as well as how much light they can let in. The maximum aperture (small f-stop) of the lens is essential since it determines how much light your lens can let in. If your lens has a maximum aperture of f/1.2 or f/1.4, like this one, it is termed a fast lens since it allows you to utilise a faster shutter speed. If your lens has a maximum aperture of, example, f/4.0, like this lens, it won’t allow in as much light, therefore you’ll need to use a slower shutter speed to get correct exposure.

Fast lenses are also significantly more costly than slow lenses! They are highly handy for photographing in low light settings, but the extra light that f/1.2 may provide comes at the price of your broad depth of focus, so they are not always the ideal choice, depending on what you are shooting.

Lenses are classified into two kinds. Fixed or prime lenses have a single focal length, such as 50mm, but zoom lenses allow you to zoom in and out on a subject without having to move closer or further away, as a prime lens does.

Zoom lenses are quite handy, particularly for fast-moving subjects such as sports or street photography, when you don’t have the time or space to physically go in and out to catch the action.

Hopefully, this article has improved your understanding of aperture and its relationship to f-stops.

In following articles, you’ll learn how to regulate shutter speed and ISO so you can take your camera completely manual, but in the meanwhile, try switching your camera to Aperture Priority mode. This allows you to manage the aperture settings on your camera while still allowing the camera to regulate shutter speed and ISO to help you achieve proper exposure. Experiment with shooting photos at various f-stops and separating objects using depth of focus. Have a good time!